Our opening hours in the Rehmer Sennhus Shop

In 2012 you could read in the “Vorarlberger Nachrichten: S´Rehmer Sennhus” is back in new splendour and with new owners. A new era begins – the old tradition of “gsennat” (cheese making) is being revived.

The Au-Rehmen alpine dairy was founded in 1926. Today, 23 farmers supply about 500,000 litres of hay milkHay milk comes from cows that are fed exclusively with fresh grassland feed, hay and little grain. » More info per year to the Au-Rehmen dairy.

In the new “Rehmer Sennhus”, cheese harpAs break (or cheese curd) is called in the dairy, the resulting material, which is formed from the milk by the addition of rennet or lactic acid to the milk breakage. » More info and cheese cloth are used and “Seagen” is still sold. Together with an auxiliary alpine dairyman, Hermann Berchtold from Schwarzenberg produces around 65 to 70 tonnes of mountain cheese per year manually. The traditionally produced mountain cheeses mature in the cellarThe alpine cheese is best located in a cellar with high humidity. » More info without air conditioning and are also brushed and salted by hand.

In this way, cheese is nowadays produced almost exclusively in the Alps in summer, and also in the “Rehmer Sennhus” in Au in the Bregenzerwald.

Products with cheese from the Rehmen dairy in the cheese shop 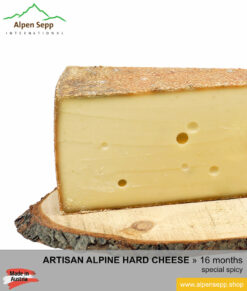 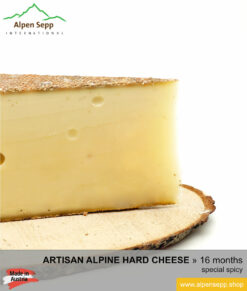 Cheesemaker Hermann Berchtold stands in front of the steaming kettle, in his mouth a piece of the cheese cloth (“Bleacho”), in his hands the other ends of the cloth. He bends deeply over the kettle and the “Bleacho” and his arms disappear in the yellowish liquid, the wheyWhey is the watery greenish-yellow liquid that results from cheese making. » More info. With the cheese cloth the dairymaid fishes out the cheese – the small white pieces floating in the whey.

Hermann Berchtold’s cheese bears his own signature. It is made exclusively by hand, as was generally the case in earlier times. However, the experienced alpine dairyman does this voluntarily. What’s more, the 55-year-old has removed the machines from the “Rehmer Sennhus” in Au-Schoppernau and replaced them with a classic cheese harp. “I wanted to preserve an old tradition that is slowly dying out,” explains Berchtold, why he chose the original method of cheese production.

Although the alpine dairyman is much more strenuous in this way, it is associated with feeling, tasting and grasping. The fact that working with all the senses has an effect on qualityDetecting cheese defects and quality - on the cheese dough. Recognizing cheese defects requires some practice. » More info is proven not only by the gold medals, but also by the lively demand. “Our cheese can be found in many exquisite delicatessens in Europe.”

For years the cheese in Rehmen was made in the same way as it is today: the milkCheese milk is the milk intended for the production of cheese, also with the concomitant use of buttermilk products, cream products, sweet whey, sour whey and whey cream (whey cream) » More info product was automatically cut and taken out of the kettle with pumps. The new owner Hermann Berchtold, however, wanted to return to tradition. They tore the modern cheese technology out and now produce as before: with the cheese harp, the “Bleacho”, the cheese is brushed and salted by hand.

“We don’t want tradition to die,” explains Berchtold. In this way, alpine dairying is much more strenuous, but: “I really do real cheese making here. I can feel, taste, grasp. It’s a completely different feeling, as if the cheese is just pumped out,” says the Schwarzenberger, who has been working as a dairyman for 20 years.

In contrast to the machine, he can produce less cheese in the same time. So is his cheese more expensive? “At any rate, it’s not cheaper,” says Berchtold. “But many people appreciate the way we work and are prepared to pay a little more.

The idea of the eight-course menu

Besides traditionally produced cheese, there are other old dairy products to buyThe purchase of food and cheese via the Internet. A big and very interesting topic in this area will probably be the easy and quick access to specialties such as - for examle - cheese. » More info in the Rehmer Sennhaus: “Gisg”, “Zieger” and “Seagen” (Sennsuppe).

“Seagen” is made from whey, contains a lot of milk proteinCasein is a constituent of the protein (protein) of cow's milk, which is obtained for cheese production. » More info and tastes slightly sweet. It is very good for the stomach, digestion and helps to build muscle. Berchtold is committed to ensuring that this old food is not forgotten: In Lech he created an eight-course menu from “Seagen” with a top chef. “From dumpling soup to dessert, anything can be cooked with it,” explains the dairymaid.