Skip to content
Meiner Wunschliste hinzufügen
Georg Seywald
5
Brilliant
Fred
5
Gigantic butcher absolutely top sausage. The best
Mariann
5
As always delicious.
Oliverkau124
5
Strong, hearty in the taste.
Mariann
5
The best long hunters I have ever eaten. I'm looking forward to try the other sausages. Too bad that there is no taste package for sausage.
M.T.
5
Excellent foods
M.T.
5
Absolutely great in taste
Bayernbeppo
5
Excellent, a pleasure *****
Bergmann
5
Very good in the taste 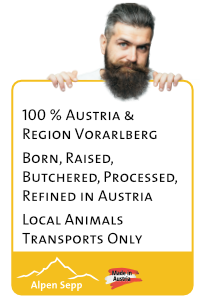 “Landhunters” impress with their sophisticated recipe. They are an ideal natural snack for in between!

Landjäger (a special kind of Kantwurst) is an original Austrian dry

The dry matter refers to that portion of the cheese that remains after removal of the water contained. The more water is removed from the cheese, the lower its dry matter and vice versa. sausage specialty, very unique through its characteristic square shape. 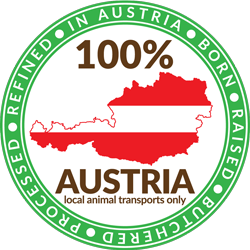 The hard sausage “Landjäger” impress with its special spicy taste. It is an ideal natural

Here in Austria, we call our fresh, natural milk for our cheese production hay milk (hay mild standard) - in Germany it is different. snack for in between!

The typical local hard sausage from the Austrian alps and alpine

The Vorarlberger Bergkäse (mountain cheese) is a regional cheese specialty from the Austrian province Vorarlberg. regions. The hard, square-shaped sausages are made from pork, beef and bacon. Landhunter (Landjäger) are short smoked and air-dried hard sausages, which are usually produced in pairs.

This specialty has always been popular with young and old. As a typical backpack sausage, landhunters are being eaten with or without bread or are eaten directly (without a knife) from the hand.

Detecting cheese defects and quality - on the cheese dough. Recognizing cheese defects requires some practice. pork and beef, as well as selected spices and then brought into the practical, rectangular shape. He succeeds in creating an exciting handmade tasty and spicy sausage for every day.

During the maturation period

The milk period is also called the lactation period. It is the time when farm animals such as cows, sheep or goats keep milk for milk production., our Langjäger sausage lose up to 40% of their fresh weight (water reduction by drying).

Quadrangular pressed in natural gut Landjäger are a specialty from Southern Germany, Austria

Since 2004, ARGE Heumilch Österreich has been bringing together around 8,000 hay-milk farmers and more than 60 dairies. and Switzerland.

Sometimes they are also called whip sticks, Bauraseufzer (farmer’s sigh) or Unteruhlbacher (after Stuttgart-Uhlbach). In Alsace, Landjäger are called “gendarmes”.

As a typical backpack sausage, landhunters with or without bread are eaten directly from the hand. In addition, a grilled landhunter on the campfire tastes wonderful.

The peculiarity of the Landjäger is in its versatility.

No Fillers, you have our word!

As the world becomes more and more interested in what’s inside the food we eat, we wanted to remind our customers of our insistence in creating a superior sausage product that meets the mark in flavor and quality.

Our sausage products have never contained any filler, and we pride ourselves in using only premium cuts of meat. It’s a tradition that guides and follows us as we continue to bring you the food you love and trust. That is our promise!

Cheese packaging must have certain markings. The purpose of these markings is to protect the consumer from deception and to announce the supply of certain information about the product. and nutritional value table – according to the LMIV (EU No. 1169/2011).
100 grams of salami contain: 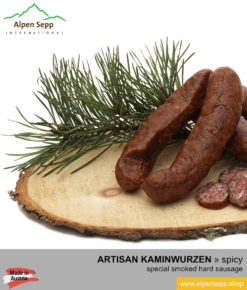 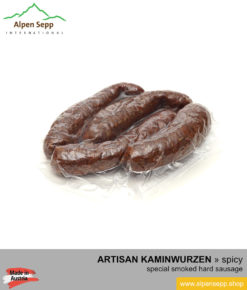 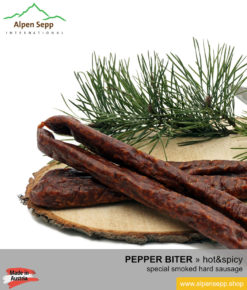 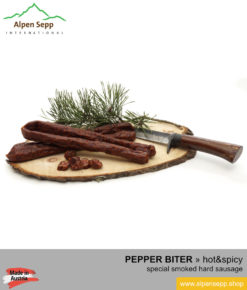 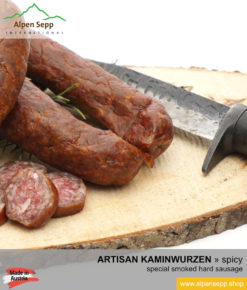 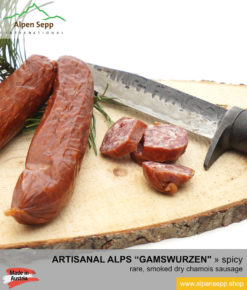 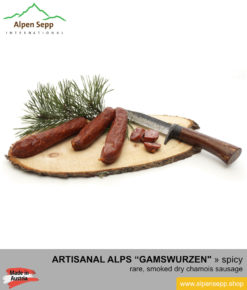 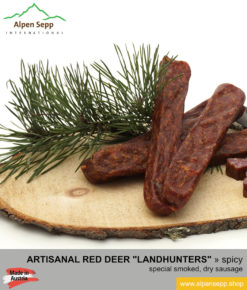 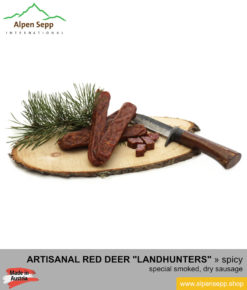 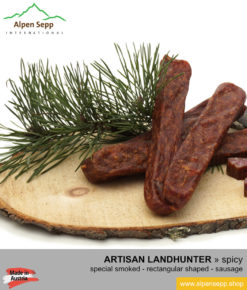 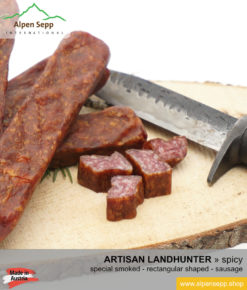