Since 2004, ARGE Heumilch Österreich has been bringing together around 8,000 hay-milk farmers and more than 60 dairies. The main production areas of hay milk are Vorarlberg, Tyrol, Salzburg and Styria. 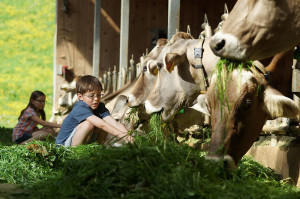 The production of hay milk is the most original form of milk production. She is adapted to the course of the four seasons. Dairy cows spend the summer on the local pastures and mountain pastures. There they can enjoy, in addition to fre

Examples include meadow foxtail, meadow fescue, meadow grass, white clover, cocksfoot, red clover, fencing, ribwort or dandelion, just to name a few. The nature provides a really varied diet. This not only tastes the hay milk cows, because the higher the species richness, the higher the flavor and quality of raw milk for other products. 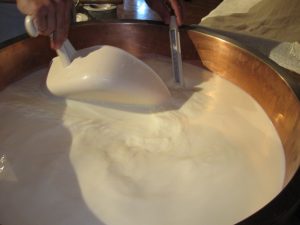 Thanks to the natural feeding of the cows during the course of the year with fresh grasses and herbs in the summer and sun-dried hay in the winter, a very high quality is achieved in the milk production. This high-quality raw material is processed into various, high-quality dairy products and convinces with its excellent taste. Cheese masters therefore swear by hay milk.